From the schooner America, which began the legacy of the Cup by winning a race around the Isle of Wight in 1851, the America’s Cup has always been at the cutting-edge of technology.

A consensus formed in open meetings among all interested parties in 1988-89 was the process that produced the America's Cup Class (ACC) Design Rule for the 1992 match, the only other time a class has actually been created and built for the America's Cup. The two previous classes before the ACC/IACC, the International Rule 12-Meter (first adopted for the America's Cup in 1958) and the Universal Rule J-Class (first adopted for the America's Cup in 1930), were chosen in an era before there were multiple challengers. Those were pre-existing class rules that were selected in mutual agreement between the potential challenger at the time and the defending New York YC, and in fact those classes were picked largely at the challenger's urging. Matches before 1930 did not use a design rule.

In 34th edition of the America's Cup will be used 72-foot catamarans with rigid wing sails, designed to a new AC72 Class Rule, as officially announced September 13 by the Defender and Challenger of Record.

Why wing-sailed catamarans?
They are large, fast and more physically demanding than monohull. They also have high-tech features and spectator appeal

Sailing fast is easy, maintaining control is critical, and the PHYSICAL CHALLENGE imposed on the sailors is immense. That physical toll has been proven in the America’s Cup World Series. Sailed on the one-design AC45, the sailors are sometimes seen flat on their backs on the trampoline in between races, their chests heaving as they try to catch their breath.

“The AC45s are really nice boats. They’re quick, easy to handle and fun to sail. But they’re very tiring. There’s a lot on for all of the crew, especially for the guys on the front of the boat. It gets a little easier as you move back! But even for me as helmsman I’m pulling on the wing sheet, grinding, hiking, looking around for tactics, as well as steering. It’s not easy.” - Roman Hagara 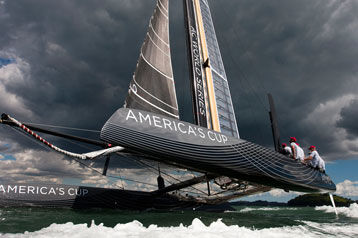 Unlike the monohull America’s Cup yachts of the past, catamarans have no heavy keel below water to counteract the tipping force of the wind. With nearly the same amount of sail area as those classic yachts but at a fraction of the weight, leverage and the weight of the crew would be the only forces keeping the catamaran upright.

The AC45 has two conventional sails up front. But instead of a traditional main sail, it is powered by a superefficient fixed WING — at 70 feet, longer than a 737’s. Light and powerful, the wing is also extremely fragile. Falling into it, in other words, could be messy and expensive.

At millions of $ apiece, and built of the same high-tech materials (e.g. carbon fiber) used in racecars and fighter jets, the racing boats in the AC45/AC72 class are among the fastest in the world - the sailing equivalent to a Formula One car. 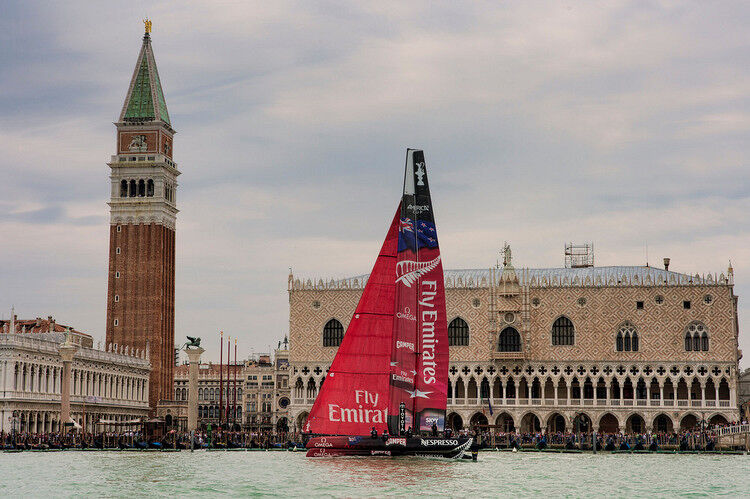 Something not typically associated with the genteel sport of yachting: a helmet, first clue that it is far more than a leisurely sail around San Francisco Bay.

The trampoline serves as a deck.

This accident raised an important question that maybe the design of these boats has become too extreme...

Artemis Racing, the Swedish challenger, has capsized its AC72 during training on San Francisco Bay on 9 May 2013.The incident occurred between 12:30 pm and 1:00 pm PT. According to news reports, emergency crews were on site and performing CPR (cardiopulmonary resuscitation) to a crewmember who had been trapped under the platform for an estimated 10 minutes. Despite attempts to revive Simpson, both afloat and subsequently ashore, his life was lost.

Andrew “Bart” Simpson, a British double Olympic medalist, was one of the 11-man crew aboard Artemis Racing’s AC72 catamaran which capsized during training on San Francisco Bay

Certainly a sad accident that will affect the rest of the teams in many ways.
“The entire Artemis Racing team is devastated by what happened, our prayers are with Andrew Simpson’s family, his wife and kids, and also the rest of my teammates. It’s a shocking experience to go through, and we have a lot to deal with in the next few days in terms of assuring everybody’s well being." - Artemis Racing CEO Paul Cayard

In the aftermath of the accident, safety concerns have been raised over the new AC72 class of yachts which has been chosen to compete in the 2013 America's Cup. This is the second accident involving the class; in October 2012 an Oracle Team USA AC72 also capsized in San Francisco Bay during training, causing substantial damage but no serious injuries.

Retrieved from "https://americascup.fandom.com/wiki/Technology?oldid=4414"
Community content is available under CC-BY-SA unless otherwise noted.